What is a Trig Point?

How is a Trig Pillar Made?

What is a Bench Mark?

The Lough Foyle Base Line

Triangulation work had long been in progress across the water and a base line had been measured. Given that at least two Irish stations had each been observed by at least two British stations, an Irish trigonometrical distance could be calculated. Further Irish triangles could then be added and distances calculated. It was, therefore, not strictly necessary to measure an Irish base line since a preliminary survey had established that suitable hill summits were well distributed through the country. Colby's defence for the measurement of a new Irish base line was that he was simply following established practice in providing a 'Base of verification'.

In 1824 he selected a site on the flat eastern shore of Lough Foyle for a base which was to be the longest of its kind and measured by methods to a standard of accuracy never before achieved anywhere in the world.

Colby devised an original apparatus for the measurement - a compensation bar of iron and brass about 10 feet long between the pivots, the total length of which was unaffected by temperature changes. Measurement of the base commenced on 6 September 1827, initially under Colby's supervision but later under the direction of Lieutenant Thomas Drummond one of the Ordnance Survey's leading mathematicians. Work was completed on 20 November 1828 having taken the most part of two summers to complete. The actual work of measurement lasted only sixty days, the remainder of the time was taken up by the winter recess and a further delay to avoid damaging crops. The length of the base, levelled and reduced to the adjoining sea level, was 41,640.8873 feet or nearly 8 miles.

The accuracy of the work was imediatly tested by re-measuring the first 400 feet, with results that disagreed by no more than 'a small segment of a dot'. A second check was done by local theodolite triangulation to compute the length of one section of the line, using another part of the line as a base. Triangulation was also used to extend the northern end of the measured base to a trigonometrical station at Mount Sandy.

A base at Salisbury Plain was measured in 1849 using the same apparatus and methods perfected by Colby in Ireland and is connected to the Lough Foyle Base through the principal triangulation network.

To preserve the site the Government acquired the land and erected three base towers that can still be seen today. The North Base Tower at Ballymulholland and Minearny Base Tower at Minearny are surrounded by private land and are not readily accessible to the public. South Base Tower, situated at the rear of the Kings Lane Estate in Ballykelly Village, can be visited.

In 1960 the Ordnance Survey of Northern Ireland remeasured the base using electronic equipment; the difference was approximately 1 inch - surely a tribute to the accuracy of the 19th century surveyors.

Mount Sandy is no longer marked on OS maps, having been claimed by the sea quite some time ago.
Here are pictures of the remaining three.

The North Base Tower in Magilligan C670343

The South Base Tower in Ballykelly C634220 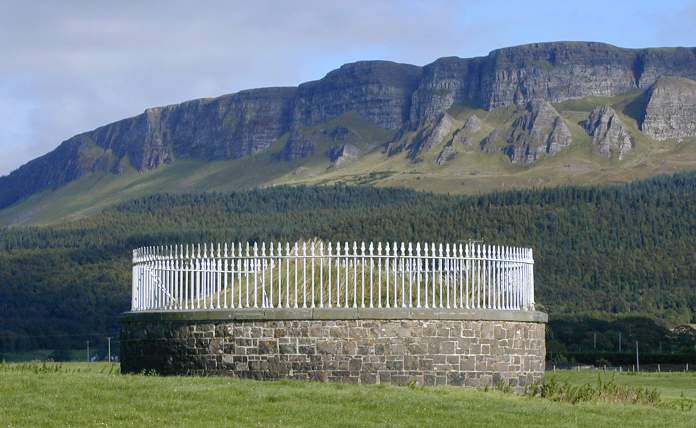 The Minearny Base Tower C659305 dwarfed by noble Benevenagh, the mountain that watched this enterprise when it started and will still be standing when the towers are no more. 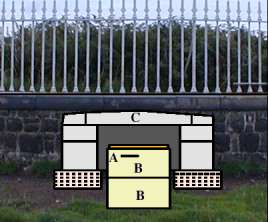 Cross section of the towers. A small chamber, the base of which (B) is formed from blocks of Dungiven sandstone. Set into this foundation is the centre point of the base (A). It consists of a mark made in a platina wire which is set in lead and concrete. Above this is a flagstone (C), which has a metal plate with an edged cross directly above the mark in the wire below.